NB. These articles reflect the views and experiences of the author (Rob Davison). The intention is to inform and entertain.
Due to variations of climate, growing conditions and other factors beyond our control what works for us may not work for you.

Straight out opinion pieces are denoted by italics.
You may wish to skip these if you are politically correct (or easily offended).

Your mileage may vary

Plant names are given with the botanical name first and a common name following in brackets.

Our climate here in Southland, New Zealand is maritime, USDA zone approximately 8b. Rainfall is reliable and distributed fairly evenly throughout the year. Soil is loam varying in depth from a couple of inches to several feet over heavy yellow clay. Soil is acid (only blue hydrangeas!)

Summer highs rarely exceed 30 degrees centigrade. Winter ground frosts typically are around -7 centigrade. We usually see snow once or twice in a winter but it rarely lies for any length of time.

All in all then, a good climate for growing and overseas visitors are often amazed at the range of things that will survive here but there are still plants that take exception to us.

About us, the people behind Maple Glen

This site is about the garden but, very briefly...

We have developed and maintain the garden ourselves with no outside help. Fortunately all of four us (at the time of writing) are fit and healthy but there are times when it still threatens to overwhelm us. Lawn mowing is required weekly in the growing season and takes over a day with three rideon mowers (one of which has a 120inch cut).

Our garden is never weed free but we strive to keep it reasonably tidy. Choosing "plants for places", that is, plants that like where they are planted and thrive helps enormously. Weeding then mostly becomes the job of keeping the competition in check while new plantings become established.

Spraying. For many people this is a contentious issue. We have never used insecticides, preferring instead to let nature find a balance. The ladybird population fluctuates in step with the aphid population and the starlings and magpies do well when the grass grubs do. It sorts itself out.

Of necessity then we do a lot of spraying in late autumn and winter. Winter is not the best time to be using herbicides as the manufacturers recommend application to actively growing plants but because of winter dormancy that is when we have to use it. It also helps give us a window of 'breathing space' in spring when we are busy with farming and nursery duties. The weeds that germinate in autumn and winter have been sprayed and are dying off and the new spring crop of weeds is slow to get started when the ground is cold. Meanwhile the established winter dormant plants are beginning to grow and will in many cases starve the weed seedlings of sunlight before they get a proper foothold.

Gardens are made of living things. Living things grow and change. That's the point, that's a good part of the fascination and interest in gardening. We get so frustrated with visitors who want a plant that will always be covered in flowers, never be more than a metre high and never need pruning or watering...if that's what you want buy an artificial plant, or just paint a concrete wall!

In a similar vein are the people who want to 'have' a garden. As if it was a project you could begin, bring to completion and then forget about. It doesn't work that way.

The waxeye is a common small New Zealand native bird. Except for the fact that an almost identical bird lives in Australia and the Maori name for a waxeye is a dead giveaway - 'little stranger'. That bird got here under its own steam and in the relatively recent past.

Birds and animals are sensible in a way that some humans aren't of course. A native Tui will happily and successfully nest in a hedge of Cupressus Leylandii (Leyland Cypress) and feed his chicks on the nectar of a South African Kniphofia (Red Hot Poker) or a Tropaeolum (Chilean flame creeper). As will the native Bellbird.

Want to provide winter nectar for Tuis and Bellbirds in Southland? Plant an Australian tree. Eucalyptus cordata produces flowers even in the depths of winter and the hungry native birds flock to it. It will also grow faster than most natives and thrive in exposed, challenging sites.

New Zealand consists of some pretty remote islands but we are still (to the consternation of some pseudo-conservationists) on the same planet as the rest of you. The air in my lungs was over Australia the day before yesterday and will be over South America next week. We are all on the one world and we should be working to look after all of it rather than trying to wall ourselves off in our own tiny little corners.

I call these people pseudo-conservationists because as far as I can tell, that is what they are. They restrict their interests and endeavours to one tiny fraction of the worlds biota (and at times to the detriment of the rest of it). Why not take an interest in all living things? Why not care about the future of all endangered species wherever they are living and wherever they evolved?

Then, maybe, you can call yourself a conservationist. 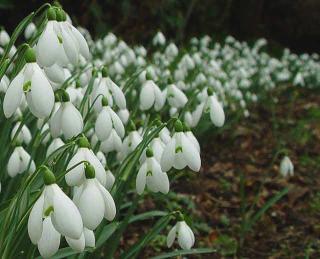 True Galanthus (Snowdrops) are sometimes confused with Leucojum (Snowflakes) but they're very easy to tell apart when you know how.

For starters, Snowdrops flower in July and August here and are truly winter flowers. Snowflakes flower at the same time as Daffodils, in late September. Snowdrops have a larger, showier flower on a much shorter stem than Snowflakes.

Snowdrops do require a colder climate than Snowflakes, perhaps that is why the latter are so often sold in their place.


This site is maintained by Rob Davison (webmaster@mapleglen.co.nz).
Last modified on 15 May 2018